This weekly market recap is brought to you by Koyfin, a powerful analytical tool that I am proud to partner with. Their platform is entirely customizable for whatever data you want to look at including stocks, ETFs, mutual funds, currencies, economic data releases (one of my personal favorites used often for these posts), crypto, and even transcripts of company events! Click the link above to get a special offer only for Dividend Dollar readers or go give my product review a read if you’re interested!

Despite the low volume from this holiday week, the markets were still able to extend their green streak. Thanksgiving week has averaged 0.6% returns since 1945, so this was not uncommon. 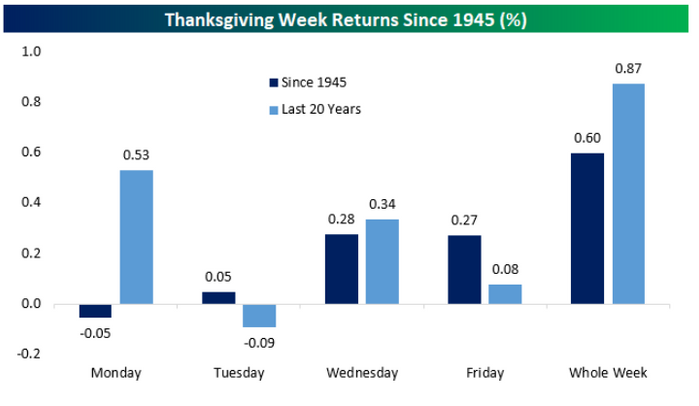 The seasonality helped to offset the market’s ongoing growth concerns which may prove to be exacerbated going forward with China re-engaging in COVID-related measures.

Ignoring seasonality, the upside this week was encouraged by better-than-expected earnings from retailers like Best Buy ($BBY), and Abercrombie ($ANF) as well as some tech names like Dell ($DELL) and Analog Devices ($ADI). Deere ($DE) the farm equipment company also was among the more notable earning reports this week.

Disney ($DIS) was also a winner this week off of the news that CEO Bob Chapek stepped down with former CEO Bob Iger reclaiming the roll for two years.

Like earnings, some economic reports were better than expected this week. The October Durable Goods Orders, October Home Sales, and the November University of Michigan Index of Consumer Sentiment read well. On the other hand, Weekly Initial Claims and Preliminary November IHS Markit Manufacturing and Services PMIs were worse than expected. 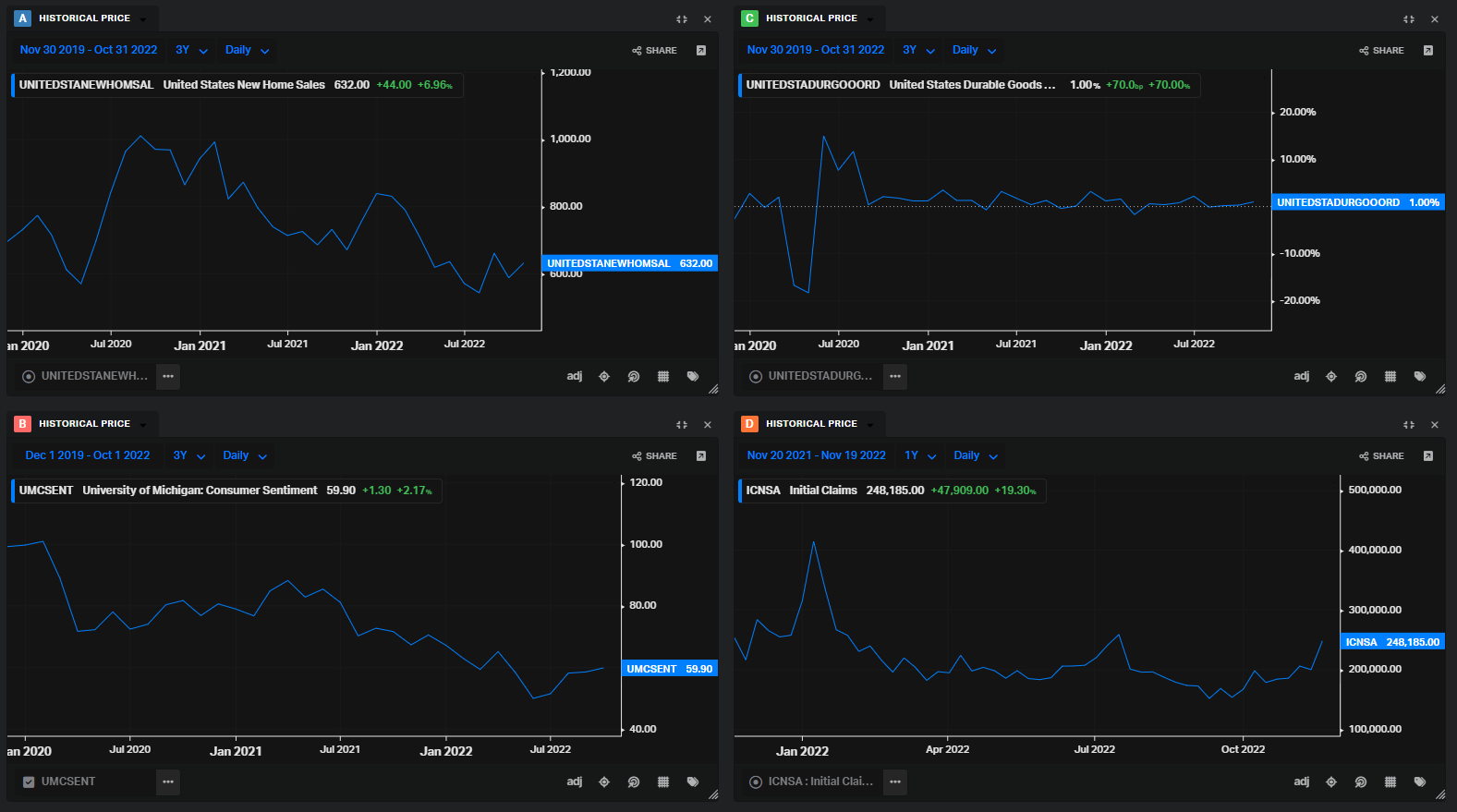 The FOMC minutes for the November 1-2 meeting was revealed on Wednesday. The report showed that “a substantial majority of participants judged that a slowing in the pace of increase would likely soon be appropriate.” This supports the market’s notion that the Fed is likely to raise rates by 50 basis points in December rather than a 75-point hike. Before the minutes were released, the CME Fedwatch Tool showed an 80% chance that the next hike is for 50 basis points.

All 11 sectors of the S&P closed with a gain this week. Materials and Utilities making the largest gains while energy showed the thinnest gain.

That’s it for the recap. Now for my opinion!

As I stated last week, due to positive seasonality the S&P could push above the 200-day EMA. I also stated that volume would be low, so if it pushed higher, it would be slow. And that’s exactly what happened this week. 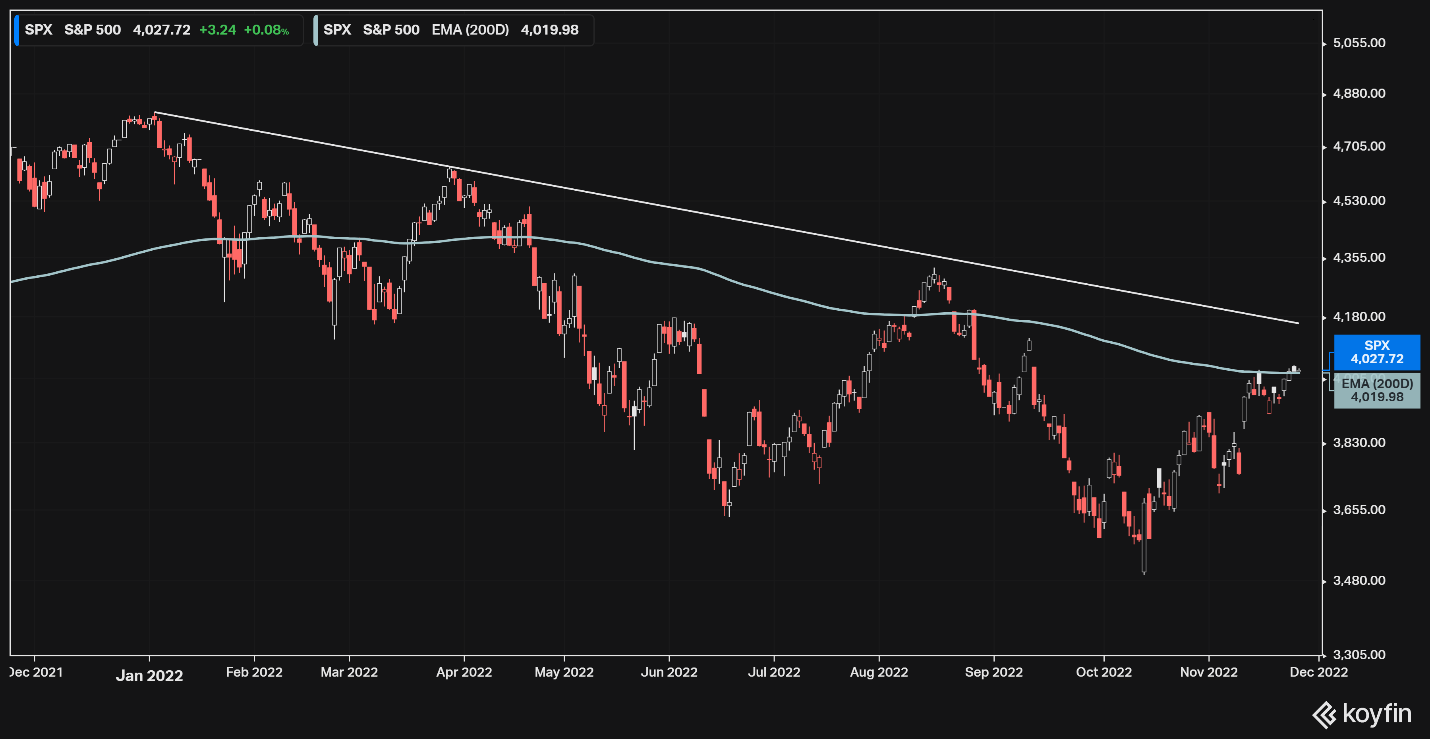 We barely broke above and held the 200-day EMA this week, and that was with low volume. That makes me think there’s not much strength behind it.

However, this seasonality could continue through the end of the year. I wouldn’t be surprised if we see a gap fill to the $4,080 area or even test the trend line drawn down from the ATH in January.

But after that, it could be anybody’s guess.

The Fed may lessen the size of the rate hikes, but we are a long way away from ever having rates decreased. Till then, the market is at risk of entering a very serious recession.

The Fed is trying to engineer a soft-landing and so farthey have done a great job of it.

However, the longer rates stay high, the closer we may get to seeing the Fed’s planned economic slow down go too far. GDP, employment, real incomes, etc. These things will start to waiver, earnings will start to miss, and the market will start to look quite overbought at these levels which will kick off some serious selling and capitulation.

Recession indicators such as GDP forecasts, yield curve inversion, falling PMI, and tightening lending standards suggest it is more likely to go that route rather than the preferred soft-landing.

Because of this, I am short with positions in $SDS and $SPXS and am holding more cash than normal. The short is only 1.3% of my portfolio and the cash is 7.1%. I’ll be adding to this short and cash position through to the end of the year if we remain trending up.

I will be writing a portfolio update later this weekend, so stay tuned for that in order to read more about my positions and plans.